RV rooftop air conditioners are generally loud, inefficient, and take up a lot of rooftop square footage that we want to use for solar panels. For those reasons, we decided to install a mini-split a/c about eight months ago. Immediately after install, we were thrilled with both its efficiency and how quiet both the inside and outside units are. Today, we thought we’d give an update on how it has been performing since that initial install.

One major caveat, however - we still have not fully insulated or built out the interior of the bus, particularly the roof. So, our bus is essentially a metal box that bakes in the Arizona sun. Okay, with that disclaimer out of the way, let’s dive into how the mini-split has done in these conditions.

How The Mini-Split is Performing

During the Arizona fall and spring (which is really like most places’ summers at 85-95 degrees), even with no insulation, this 12,000BTU mini split has worked like a champ. It cools the bus down easily and stays nice and cool inside the entire bus with no problems at all.

During our short, mild winter, we tested the heat pump function of the mini-split. One morning when we picked the bus up from storage, it was a particularly cold morning for us at 40 degrees F. (Yes, we know for our friends up north or in the midwest, you are laughing at us right now. We were freezing!) We turned on the mini-split and turned the temperature setting to 86 degrees, the highest setting available. It quickly started blowing out hot air over 100 degrees, and in just a couple of hours the bus had warmed up from about 50 degrees to 80 degrees. I would say the heat pump works great!

Alright, let’s get to the real question...how has the mini-split done in the miserable heat of an Arizona summer? I’m going to answer in two scenarios.

The first is when we pick it up from storage after it has been sitting in 110-degree temperatures all week. It is not unusual for the inside temperature of the bus to be over 120 degrees - remember we are like a giant oven with no insulation on our metal roof right now. In this case, the mini-split takes quite a while to cool the bus down to 75-80 degrees, especially when we are in and out working on it. If these were the conditions we lived in all the time, this 12K BTU a/c would definitely not be enough. However, we anticipate that the insulation and finishing the interior will make a large difference in how the mini-split performs.

The second scenario for these crazy temperatures comes after scenario number one. Once we get the temperature inside the bus down, even when the temperature outside is still over 100 degrees, as long as the sun isn’t beating directly overhead, the mini-split is able to keep the temperature stable in the 70’s or low 80’s. In fact, in the hot summer evenings when the sun is low, it can actually feel quite cold in the bus.

One last note: we have had to make two small changes to the install. 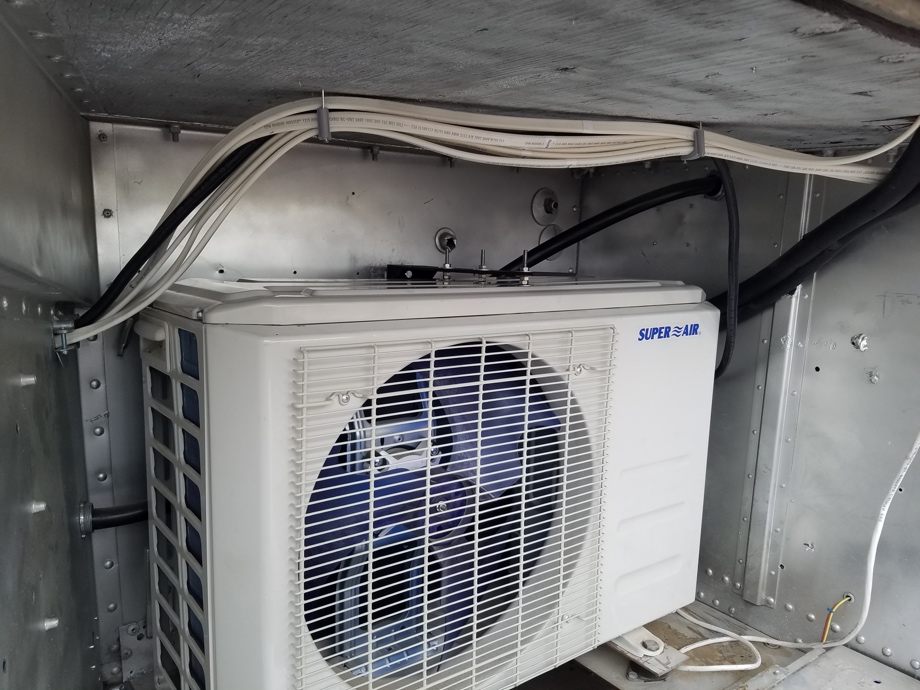 Second, we had to change out our 50 Amp breaker that feeds the Victron inverter. We kept having a problem that whenever we ran the mini-split on shore power, it would trip that 50 Amp breaker. We knew absolutely that we were pulling only about 25-30 Amps at the time with this a/c plus our other small a/c that serves our battery bay and also charging our battery. It wasn’t tripping because of an overdraw. Well, the problem was that the circuit breaker was a GFCI. It turns out that these inverter mini-splits cannot be put on a GFCI. Because of the “inverter” part of the unit, there is something in the frequencies or resonance that makes it look like a ground fault (even though it’s not). So, we swapped the 50 Amp circuit breaker for a non-GFCI breaker, and everything is working perfectly. No more breaker trips. We still are protected on our shore power connection with our Progressive Industries EMS, so it is not a problem to get rid of the GFCI protection on that circuit breaker. 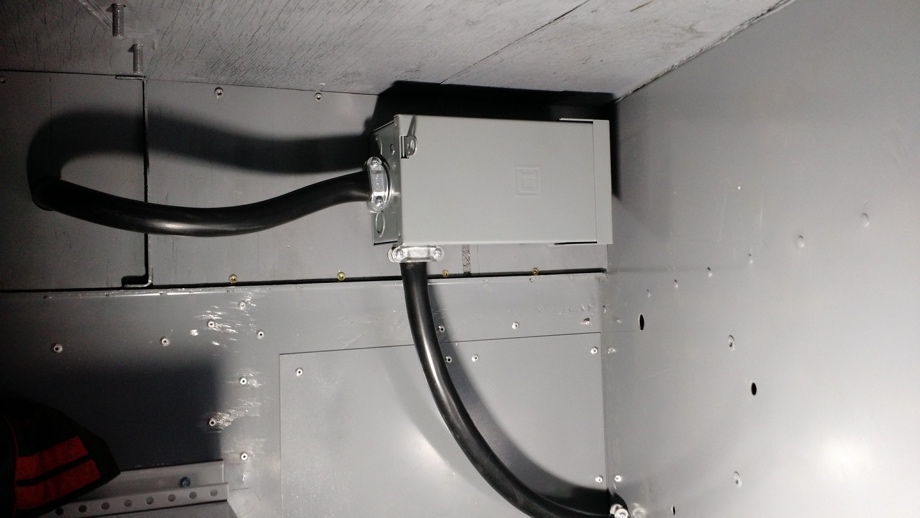 So, there it is. The mini-split works great! We are very happy with it and expect it will serve us very well, especially once we finish the interior and start chasing mild weather.

We will do another update down the road once the insulation and ceiling and walls are in.