In the spring of 2022, it seemed like more and more of our campsites were more than just a smidge unlevel. Maybe it was just us, or maybe we were all of a sudden now more sensitive to it. One thing was clear, we really wanted a leveling system that did not involve so much effort. Up to that point, we had been using the "Lego" style plastic blocks to level, or we would just deal with the bus being unlevel. Leveling with the orange Legos is not terribly complicated, but it does involve significant orchestrated effort. To top it off, we almost never got it perfectly level. 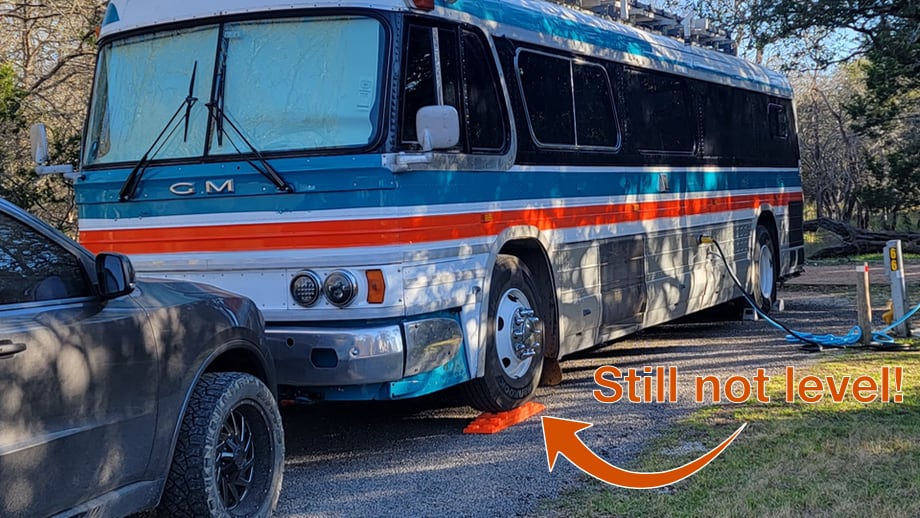 Stone Mountain near Atlanta, Georgia was the campsite that broke the camel's back. Not only was this one of the most unlevel sites we have been to, but also it was on the side of a steep hill, had very crumbly asphalt, and had ground so soft that our 20-ton jack was pushed about 3 inches into the ground when we tried to use it to level the bus. We ended up finding a rock nearby to place in the large hole that was formed with our first attempt to level with the jack. 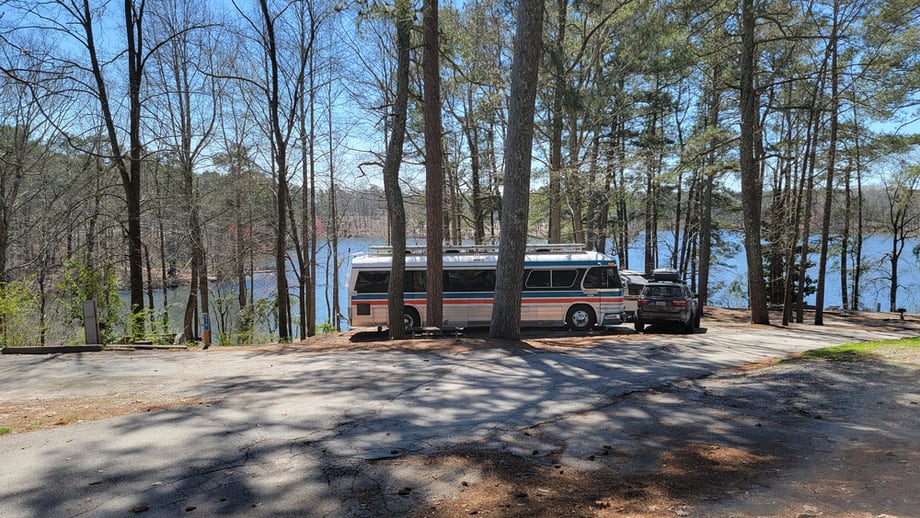 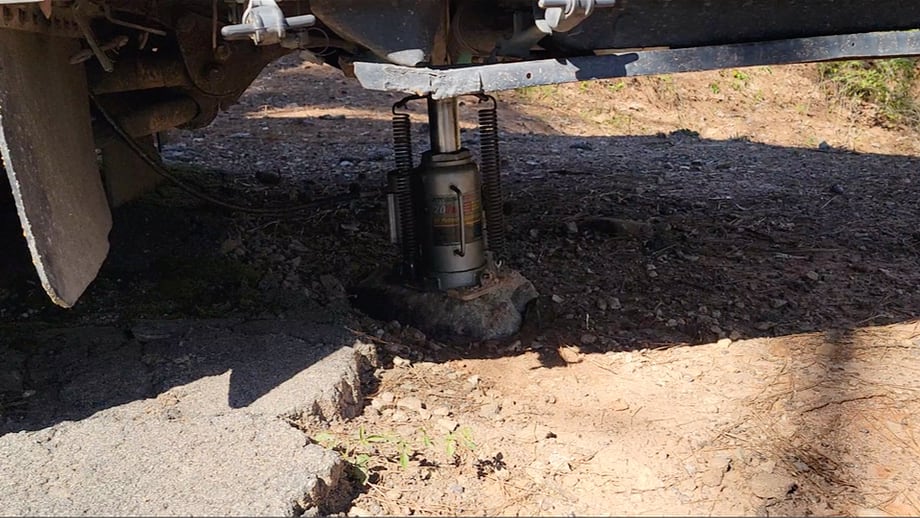 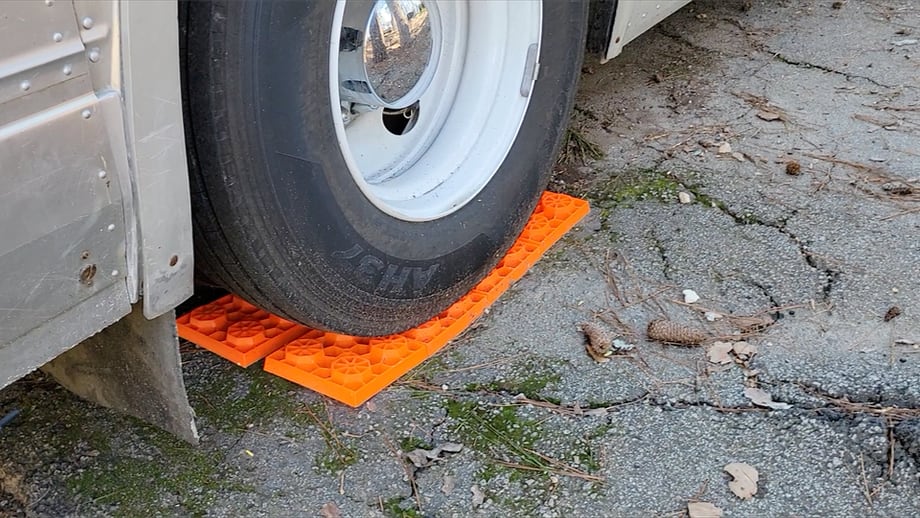 At that point, we went into research mode. Since leveling systems are so common on motorhomes, we didn't have to look very far. There are quite a few very nice systems offered and even some DIY systems described in the bus forums and groups.

The first systems we considered were the hydraulic leveling systems. These systems use long pistons attached to the body to level the bus. We have seen many of these at campgrounds - some even lifting the wheels of an RV off the ground! Doing this with the bus would completely destroy our airbags. The benefit of this system is that it provides the most stability since the jacks are attached to the body. The technology is also very mature and reliable since thousands of RVs use this type of system. The Cons are price, complexity to install, and the tendency to hang lower than anything else essentially lowering your ground clearance. 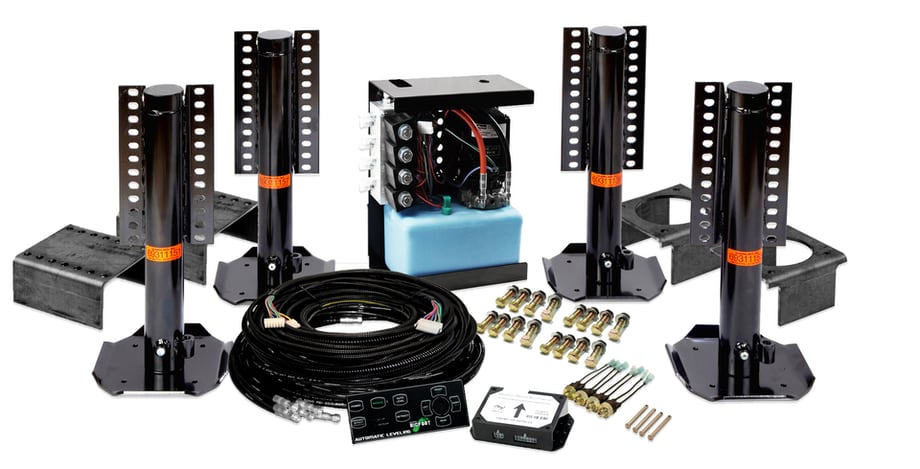 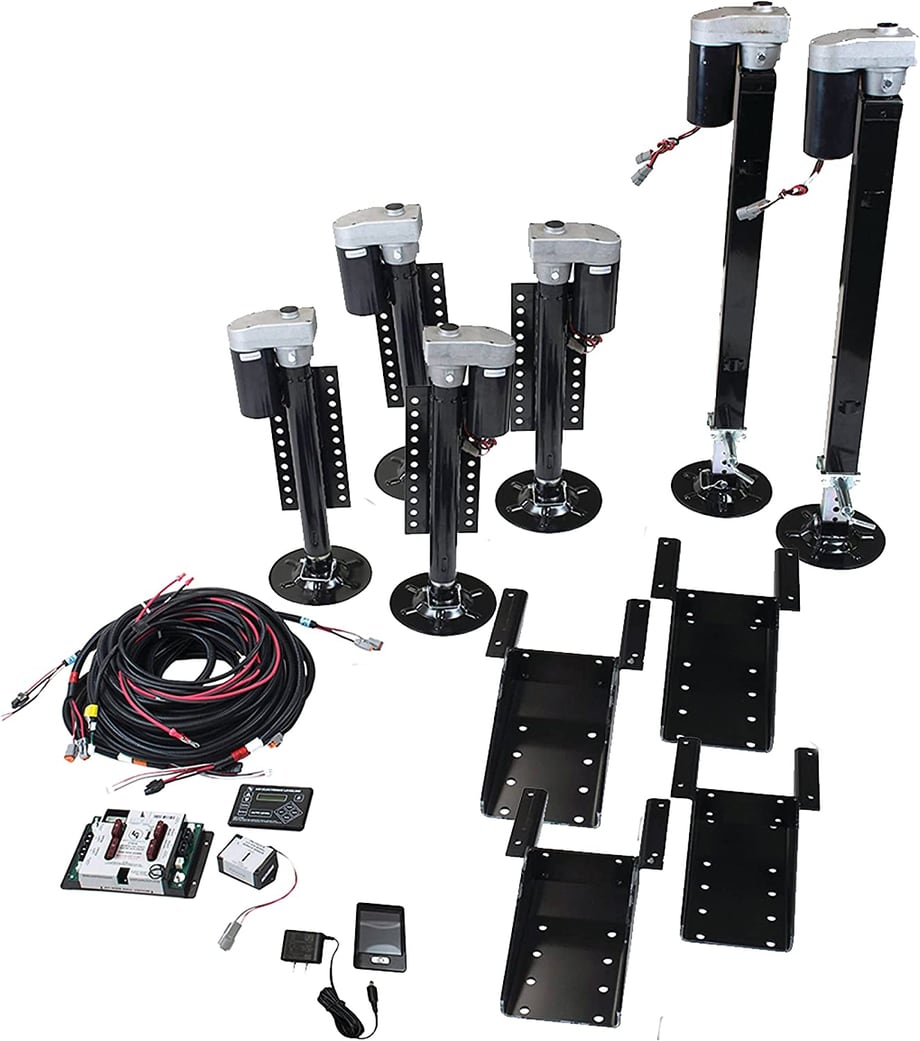 We see these mostly on travel trailers and they usually consist of scissor-type jacks or stabilizer legs that come down and make contact with the ground. These are not strictly leveling systems as they are intended more to be used to stabilize a trailer as opposed to actually leveling it. The advantage of these systems is that they are quite a bit less expensive. The disadvantages are that they are manual, lower the ground clearance, and have relatively low weight carrying capacity. 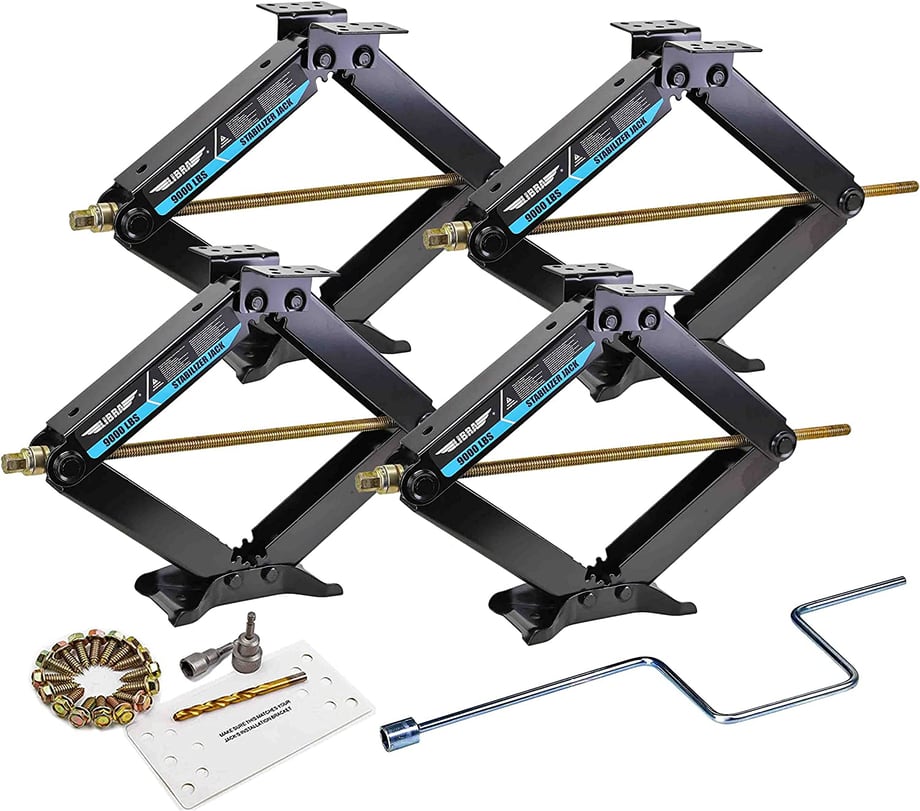 These really got our attention because they utilize the air suspension already on the bus. Even modern coaches use this approach. Some systems are used in conjunction with hydraulic levelers while some are just stand-alone systems. All the air leveling kits we saw for vintage buses seemed to remove the factory leveling valves and replace them with air regulators that control how much pressure is in the bags. That works well for leveling the bus when parked. However, you would also have to self-level for driving. We did not like this aspect because it leaves it up to the operator to find the right pressure to bring the bus to the correct drive height. The bus must be at a precise height to align the driveline correctly. We believe this system makes it too easy to drive off at the wrong height. After studying all these systems, it occurred to us that we could design a system that leaves the factory leveling valves in place and only uses the airbags for leveling when the bus is parked. Our first idea was to use an actuator in place of the control linkage to adjust the ride height. By varying the distance between the body and the axle, we could control the height of the bus. The disadvantage to this option is there is only one leveling valve that controls both sides of the front of the bus. That means that we could only control the front-to-back height, but not side-to-side, in the front of the bus. 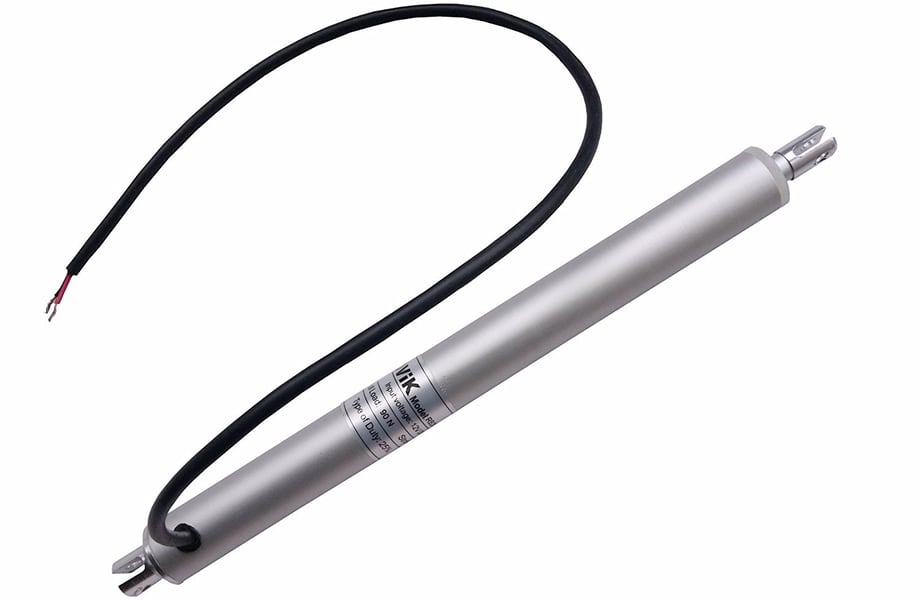 Our second thought was that purging solenoids might be a good way to go. The first hurdle to overcome was how to disengage the factory valves. If we simply installed a purge solenoid, the factory leveling valve would bring it back to the factory ride height. We needed a way to isolate the airbags from the factory leveling valve. Our initial thought was to use two purging solenoids. One would work as an isolating valve and the other would work to purge air out of the airbags. In contrast to the actuator option, we could split the airline to the front leveler, allowing us to control each side in the front independently, just as we could in the back. We built this system and it worked great! After a few days, we discovered a problem: the bus started to squat. When the air leaked out of the main system, it allowed the air in the airbags to escape. It took about three days to leak down, but it was clear that this was not going to work. How was the air escaping? 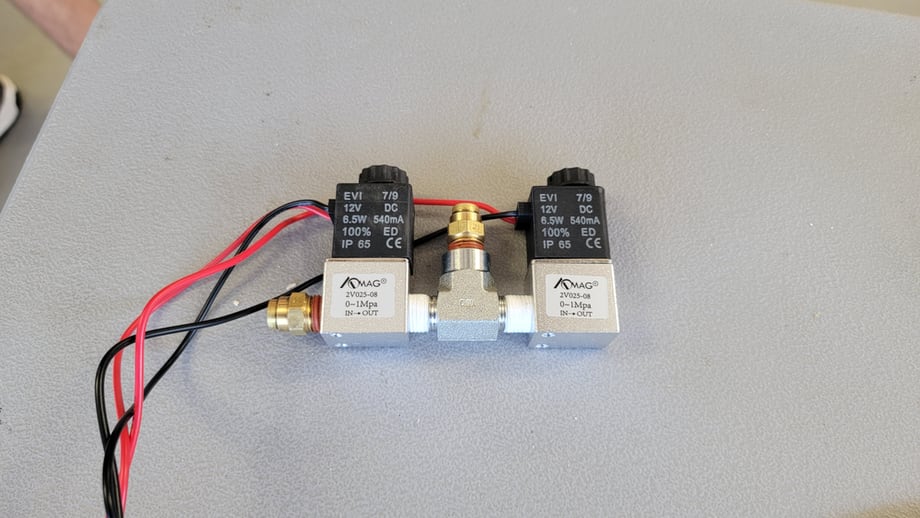 After more research, We learned that most solenoid valves are not designed to hold pressure "backward". Sometimes this is not a problem. If the bus is level, the factory valves will actually keep the airbags completely pressurized even after the rest of the system has leaked down. However, if we deflate the airbag in an effort to level the bus, the factory leveling valve will try to fill the bag but will not be able to because of the isolating solenoid. After some time (around 3 days on our bus), most of the air pressure will leak out of our system. This leaves us with a condition where there is high pressure in the airbag and low pressure on the "wrong" side of the isolating solenoid valve in the rest of the system. This lets the high-pressure air in the airbags pass through the rest of the system and leak out as well. Back to the drawing board.

We originally came up with two solutions for this problem. Solution 1: We could use an auxiliary air compressor to keep the bus's air system at a constant 120psi. This would have the added benefit of having redundancy if our air compressor on the engine failed. We carry an auxiliary air compressor anyway, so it would be easy to just plumb it into the system. However, the compressor going off at all hours of the night would become annoying and probably use a fair amount of power. Solution 2: We could replace the isolating solenoid valve with one that could isolate the bags better. We went with solution 2 and installed a motorized ball valve for the isolating valve.

With this new plan, we got to work replacing the isolating solenoid valves with motorized ball valves. This worked great! We have been using this system on our bus now for about 4 months and we level the bus pretty much every time we set up camp. We also discovered that it works great at the dump stations to lean the bus to empty our tanks a little further. 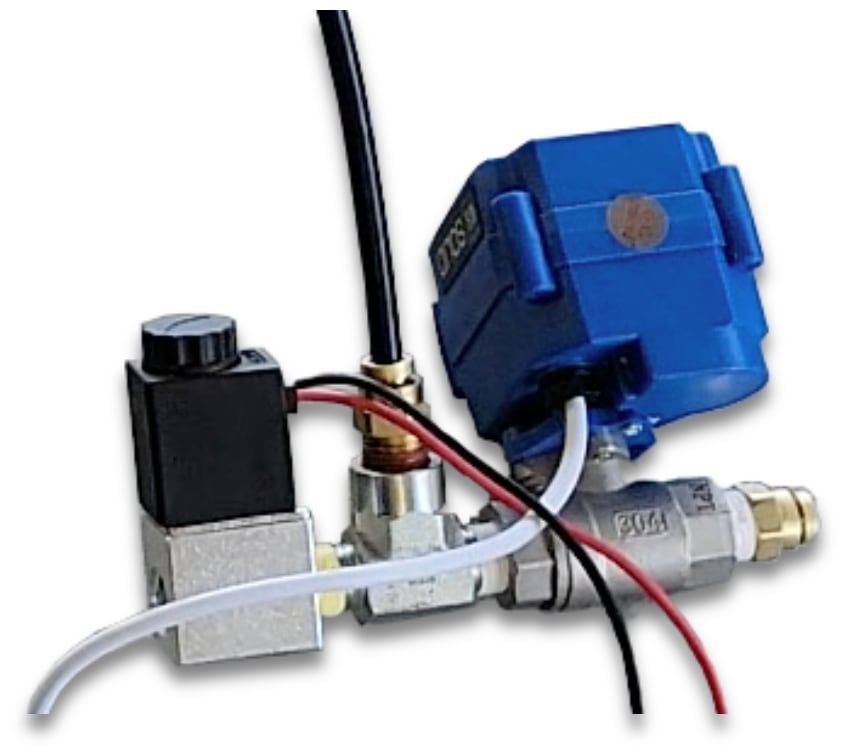 How do we control the valves? Can we automate this? We control our valves through an 8 channel relay board and our home automation platform. Because we already had that set up, it was pretty easy for us to connect it into our existing system. It also allows for an easy automation path if we want to go in that direction in the future. Another very viable option would be to just use a series of switches or even a touchpad. In the video, we talk about future plans to use a small, inexpensive board with an accelerometer and gyroscope to automate the leveling of the bus. For now, we are literally using a small level and just pushing the switches on our phones, manually dumping the bag or bags that are the highest, until the bus is level. Honestly, it usually only takes a few seconds to get the bus completely level so we are still undecided about automating it. 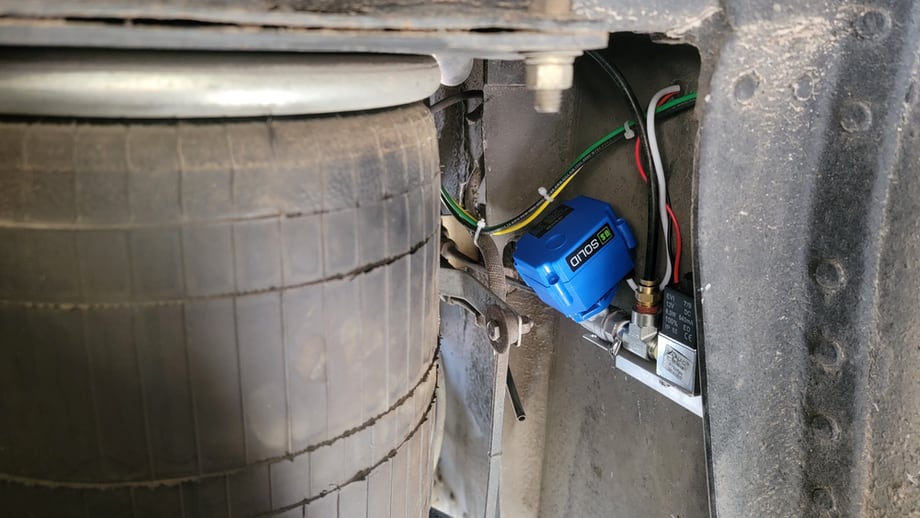 Please let us know if you have any questions. The system has worked great for the last four months that we have used it, and we will keep everyone updated if that changes.

Supplies and Tools We Used